Studio #9 - The Tipi at Rainbow Ranch 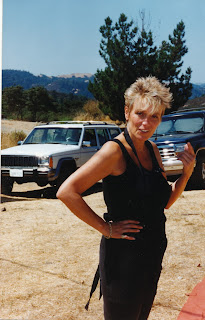 Ah, the tipi: the most romantic of my living spaces, the  simplest of studios. A life-long attraction to Native American lore, life style and spirituality inspired my 400 “square foot” tipi at Rainbow Ranch in Calistoga. That and the 5 x 8 room (next to the kitchen and across from the pantry) they called the “Chef’s Quarters.” Nothing inspires creativity more than necessity.

Nomadic Tipi Makers of Bend, Oregon, those same folks who created the leather tipis for Dances with Wolves, made a canvas one to my specs and sent it by UPS in a cardboard box with instructions on how to raise a tipi. The 23-foot poles came by freight in another, longer truck. 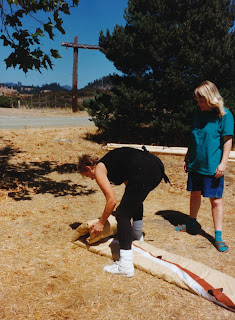 I had a pad built on the slope of a gentle hill near the kitchen door and filled the pad with gravel from the nearby quarry, laying conduit and electrical wiring underneath, which, ultimately, came up beside my bed and by my “bead table.”


With a friend I constructed a giant, egg (tipi floor-space) shaped template out of newspapers and with a utility knife cut a piece of beige remnant carpet to exactly fit inside the tipi on top of a canvas pad on top of the even gravel. The lining attached to the poles was supposed to protect me from rain dripping in and the opening at the top rarely drizzled wetness or smoke into the space. 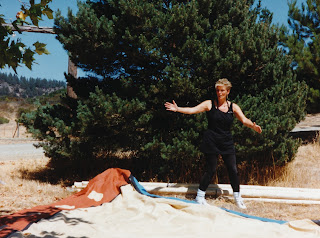 I faced the opening east to greet the morning sun. I placed my hundred and fifty year old wood stove in the center and learned how to vent the tipi by directing the smoke poles away from the direction of the wind.

True to my Native American period, I made mostly dangly things out of seed beads: earrings, medicine bags and loom-work bracelets and belt buckles. I sat on the floor on my zafu pillow and created beadwork on a table made from a 4 x 8 plywood plank perched on four milk crates. 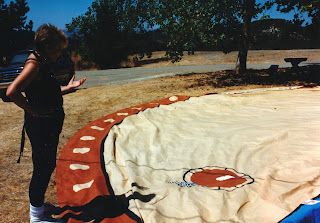 As always during my cooking career, there was a
studio on the side for after hours, no matter when those hours were, or how few hours were available to me. At Rainbow, my day began at 5 with building a fire and setting bread dough to rise and ended about 8:30 pm with warm milk and cookies for the guests, so productivity was not the operative goal for this studio. Even so, just sitting down cross-legged in front of the tiny fire and doing a few weavings or sorting beads or graphing a project helped settle my mind and body for the night. 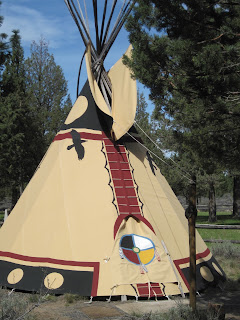 Several years later while living in San Diego and cheffing at the Chopra Center for Well Being in La Jolla, my Aunt Bonne came for a visit. I showed her photos of my tipi. She said, “Well, that makes sense.”

“Because of that Cherokee in your father’s lineage.”

“What? What Cherokee?” News to me. 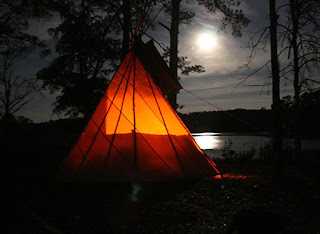 The conversation went a long way to explain my interest, not to mention Dark Sage, the imaginary Indian Medicine Man friend of my childhood.