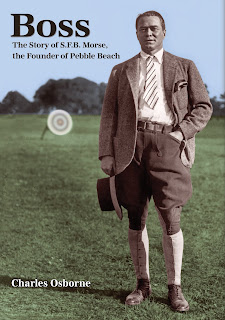 “A newspaper dubbed my grandfather “The Duke of Del Monte” and although he pretended to be embarrassed by the title, I believe he liked it. Del Monte was more than a chunk of some of the most beautiful land on the planet. It was a style of life that included golf, tennis, polo, beautiful mansions and beautiful people having a good time. He enjoyed being in charge of that. In fact he wanted people to damn well know he was in charge. Damn was one of his favorite words.

“He died when I was 22 years old while I was studying art at the University of California at Los Angeles, living above a merry-go-round on the Santa Monica Pier and working as a cue-card boy at NBC, none of which really met with my grandfather’s approval. Still, the man was a big influence in my life and in the lives of many others, a benevolent despot who ruled the Monterey Peninsula.

“His friends called him Sam and his employees called him Mr. Morse. People referred to him as S.F.B., and that is how he stylishly signed his paintings and documents.

“The family called him Boss.”
– Charles Osborne, from the dust jacket of Boss